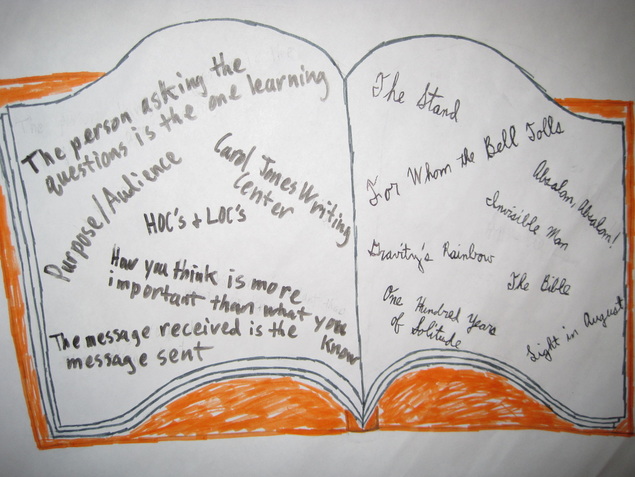 2 February 2014
I know what you're thinking, and you're right, I am not artistic. That is probably one of the reasons I am an English major. I am also not overly creative. This is a big reason why I could not come up with anything better than a book with quotes and titles in it. That being said, these are a lot of things that define who I am as an English major and who I want to be as a teacher.
On the left page are sayings and other things things related to English. There are the obvious ones like HOC's & LOC's and Purpose and Audience. Any English major has heard these things until their ears are numb. The other things are sayings by my boss at the Carol Jones Writing Center (OTC) or my RDG 474 teacher. One of the sayings is, "How you think is more important than what you know." This really connects with me because in my opinion it really is all about how you think and knowing how you think. Knowledge is power, this is true, but knowledge is useless if you cannot apply it to your life. What I mean is that it does not matter if a person knows facts and could destroy any competition on Jeopardy; what does matter is how they think. Can you analyze a situation and break things down in order to come to the best conclusion? Can you analyze anything? If all you can do is regurgitate facts, then that can only take you so far.
On the right side of the page are books that have impacted me in some way. These books are For Whom the Bell Tolls, Gravity's Rainbow, Absalom, Absalom!, Invisible Man, Light in August, The Stand, One Hundred Years of Solitude, and last but not least, The Bible. Describing their effect on me would take a novel by itself. One that was left off the page is The Road. That is the one that helped me discover how amazing reading is, and without it I might not be where I am today. Every one of these books has challenged me in different ways (especially the Bible), and I firmly believe that in order to know who we truly are, deep down, we must be challenged in some way, shape, or form.